Hello everyone!  It’s time for a new edition of the KY Arches Arch Trip!  In our previous two trips, we visited arches in Carter Caves State Park and the Red River Gorge!  Now we are heading off to a different part of the state!  Did you know that Kentucky has around 2500 documented natural arches and bridges?  Though many are smaller in size there are plenty of larger arches throughout the state. The Red River Gorge region of the Daniel Boone National Forest has the second-highest concentration of natural arches in the United States behind the Arches National Park region of Utah.  With over 1000 documented arches in the RRG, an interesting story is developing in another area of the DBNF where two arch hunters are giving the RRG a run for its money.  This area encompasses McCreary, Whitley, Pulaski, and Laurel Counties which includes both the Stearns and London Districts of the Daniel Boone National Forest as well as the Kentucky section of The Big South Fork National River and Recreation Area. Around 800 arches have been documented, 85% found by two arch hunters, and one of those arch hunters has documented over 550 himself! The most interesting thing about it all is that there is a high probability these two explorers are only scratching the surface and it is more than likely there are 1000’s more arches in this region to be discovered.  All this brings us to our next Arch Trip as we take a journey through these districts of the DBNF into the Big South Fork to some mostly lesser-known but very impressive and beautiful arches and bridges.

A note about many of these arches.  Due to their locations which are easily accessible many of these have seen some serious abuse.  When visiting arches please do not build fires, etch, camp under, spray paint, litter or dig for artifacts under them.  Heat and etching accelerate the eventual collapse.  Paint is difficult to remove. Litter is unsightly.  Native American artifacts are to be left alone.  Camping is not permitted under arches or recesses and all camping must be at least 100 ft away.  All of these actions are illegal and punishable by fines.  If you visit an arch and you find trash, please pick it up.  See a firepit or fire remains under it, please disperse it.  Thank you!  Now onto the tour! The first stop on our tour is as impressive as any arch in the state.  With a measured span of nearly 100 feet, Fishtrap Bridge is larger than any arch in the Red River Gorge.  Unlike Sky Bridge Arch or Natural Bridge Arch which are located on ridge tops, Fishtrap is found down in a holler formed by eons of water erosion. Another unique feature of this bridge is two wet weather waterfalls that are right next to it and make for an impressive sight when they are flowing well. Access below the deck on one side requires some rock navigation while the other is a gradual descent.

To get there:  From KY-80 Hal Rogers Parkway west of London turn north on White Oak Road towards London Auto Sales.  Turn left on KY-1956 Somerset Road for approx 1.5 miles and turn right on to KY 1464 Falls City Road.  The road will turn to gravel and become Forest Road 4094.  At approx 2.6 miles look for Forest Road 4095 on the left.  There are two options here.  1. If you have a lifted 4 wheel drive vehicle continue out FR 4095 for approx 1 -1.5 miles.  2. Get out and hike the 1 - 1.5 miles.  Either way, look for an old 4x4 trail on the right above the GPS location for the arch.  Follow the trail down the hill which will put you right on top of the bridge. 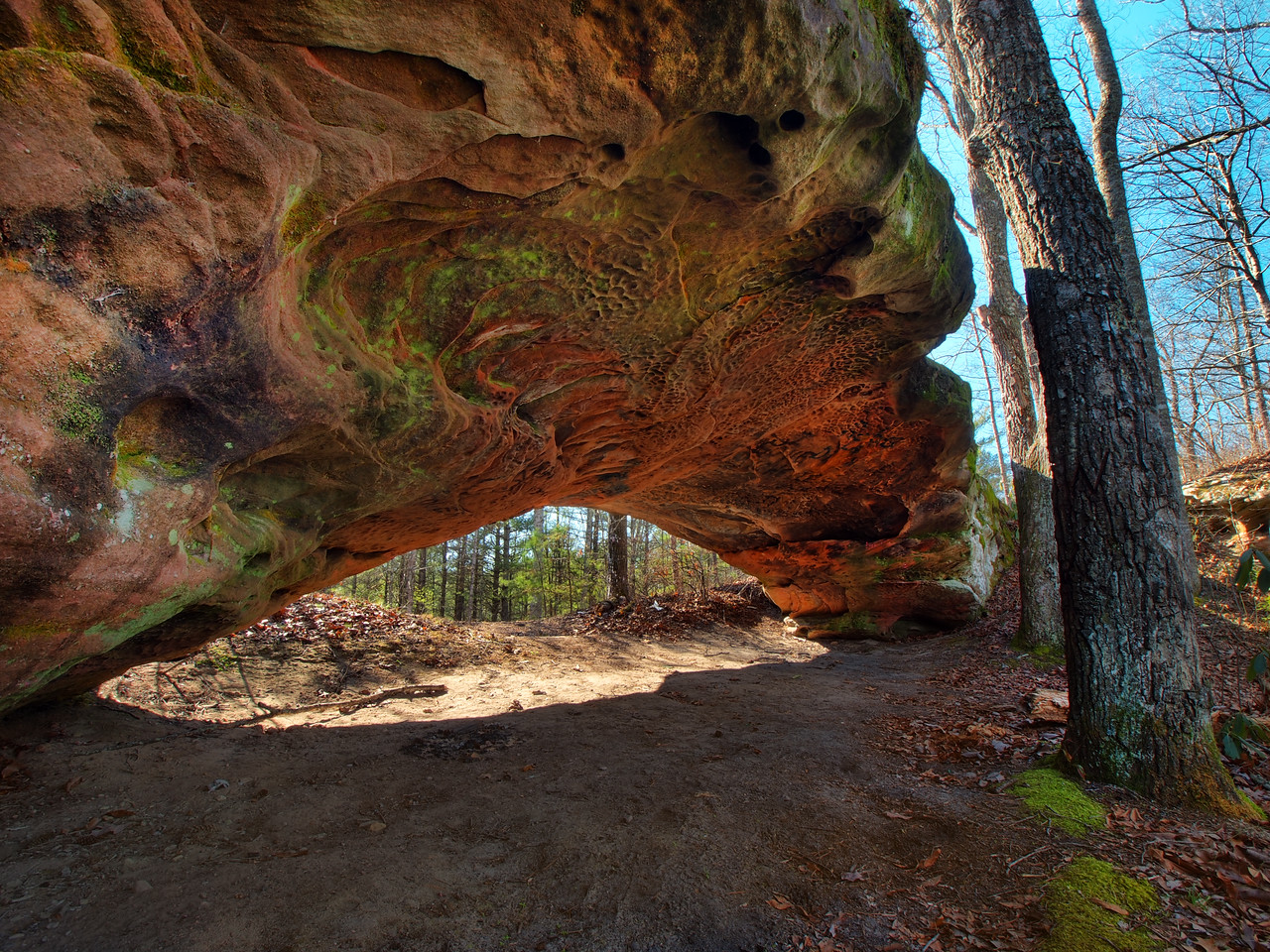 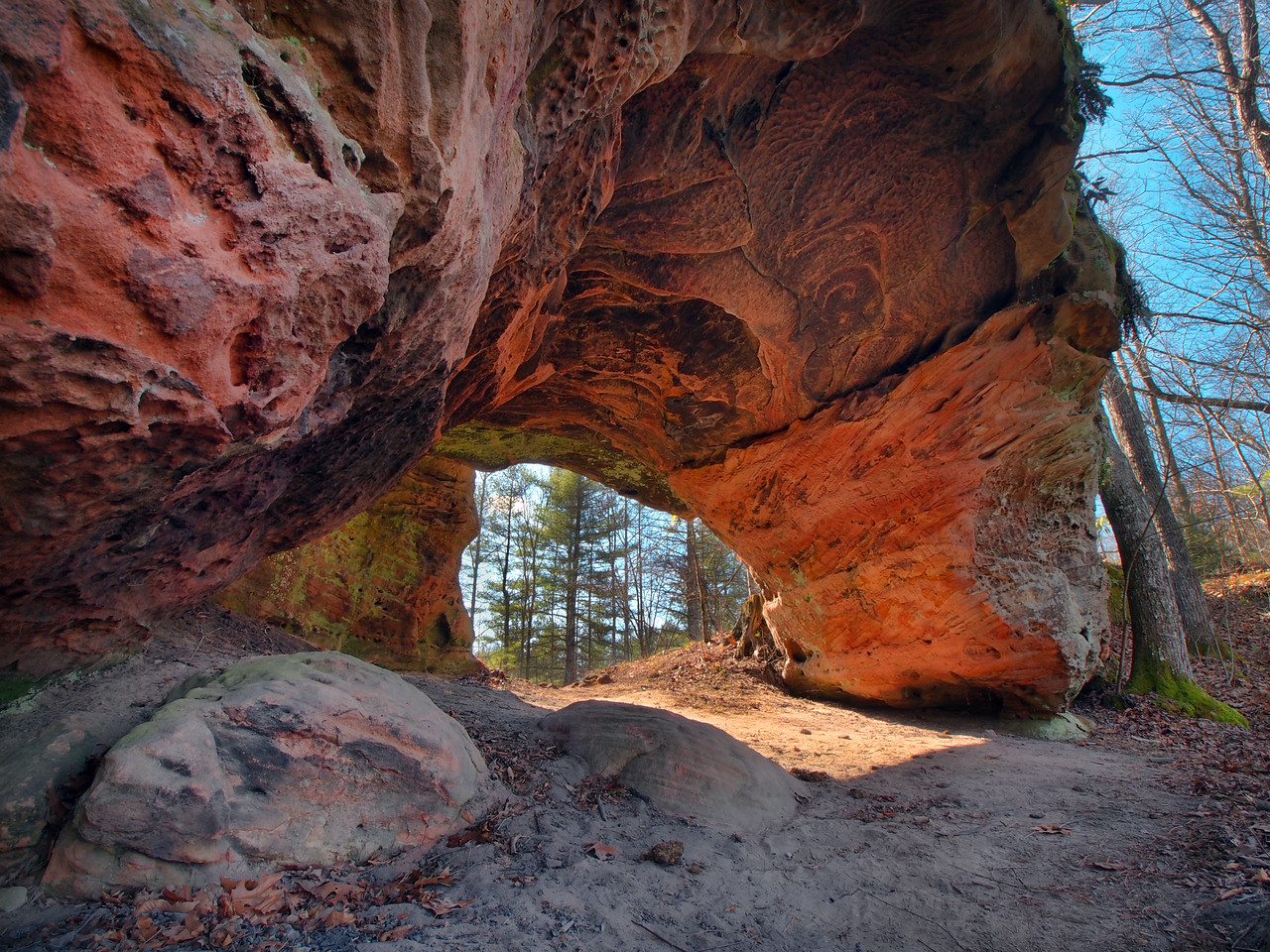 Located roadside, more than likely this is where you will see the worst abuse of all the arches on this tour.  The old wooden barriers to keep vehicles from driving on them are gone so it’s not surprising to see an off-road vehicle sitting on the east arch.  Finding the remains of a fire under them or trash all around is not uncommon.  Lastly, these arches have been tagged with graffiti on the side opposite from the road.  Though disheartening, they are still worth a visit and are visible from the road as you pass by them on the way to our next stop.  Both are span arches though the west arch has always reminded me of a turn of the 20th-century coke oven found near coal mines.  Every time I’ve been here I’ve had to clean up something or disrupt a fire pit so grab that trash bag.

From Fistrap Bridge:  Return KY-80 Hal Rogers PKWY and turn left towards London.  Take I-75 south to exit 38 KY 192.  Make a right at the end of the exit and follow it approx 5.7 miles to Line Creek Road and make a right.  See below for the remainder of the directions.

From KY-192 west of London: Take Line Creek Road Northwest for 5.7 miles, keeping left at each of the 3 Y-type intersections. At the first Y intersection, the road to the left will become gravel.  The arches will be on your right. 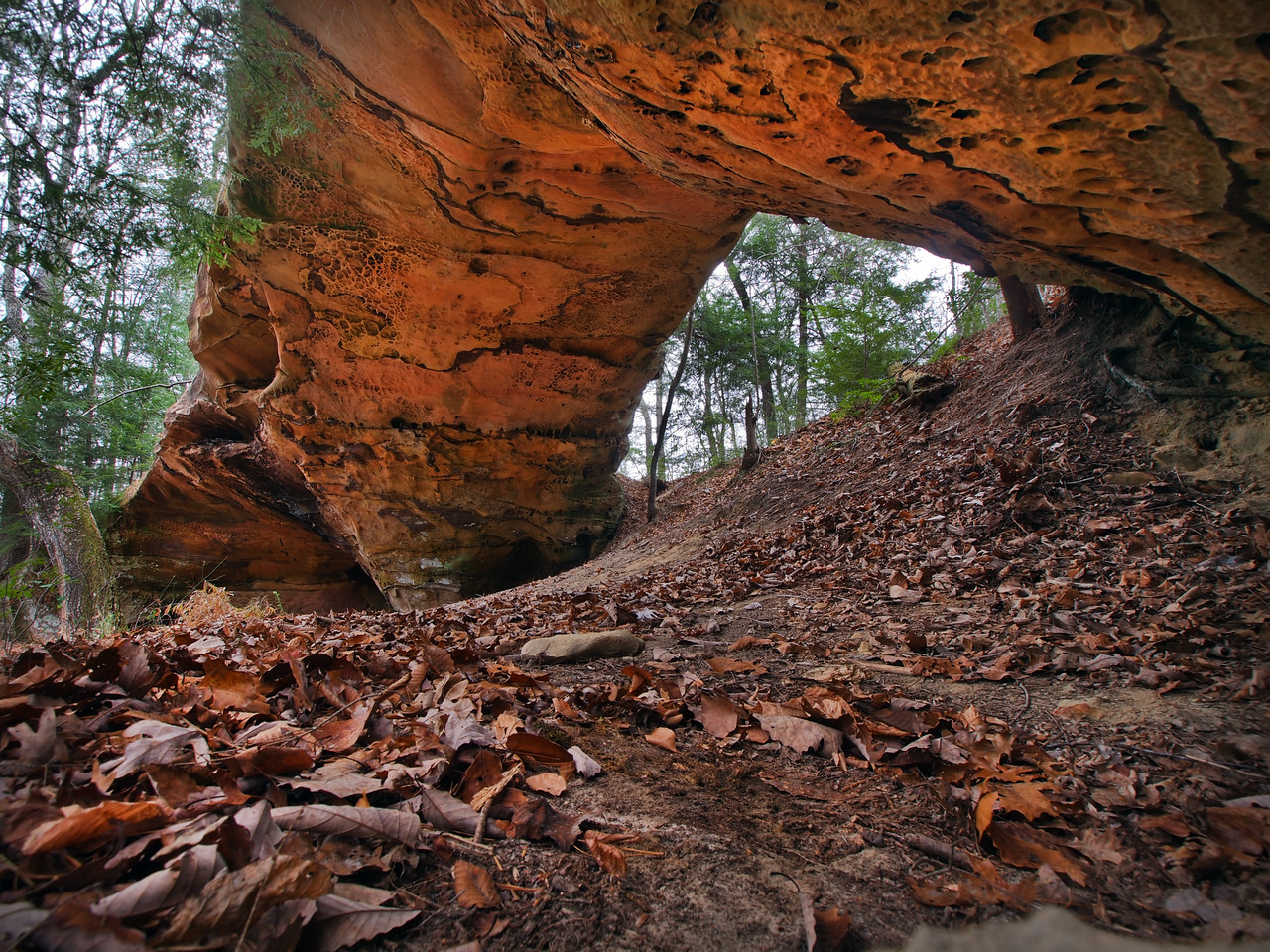 Called Skeleton Caves by locals, Bolton Branch Twin Arches are a beautiful pair of arches that require an easy off-trail .5 mile (if that) hike.  The trail leads you to above the arches where they will be on the left. A steep but manageable sandy descent through the largest arch will take you to the base.  Once below you will see how impressive this formation is and see the west arch is significantly smaller than the left.  Between the arches you’ll notice the sandstone is black, this is scoring from a fire pit which I personally have dismantled three times.  On my last few trips here there has been no evidence of camping or building a fire under the arches. Though that could have changed since my last visit.

To get there:  From Daylight Twin Arches continue driving out Line Creek Road for approx .4 miles and look for a dirt road on the left.  Park at that road without blocking it and look for a trail to the right a very short distance down on that dirt road. 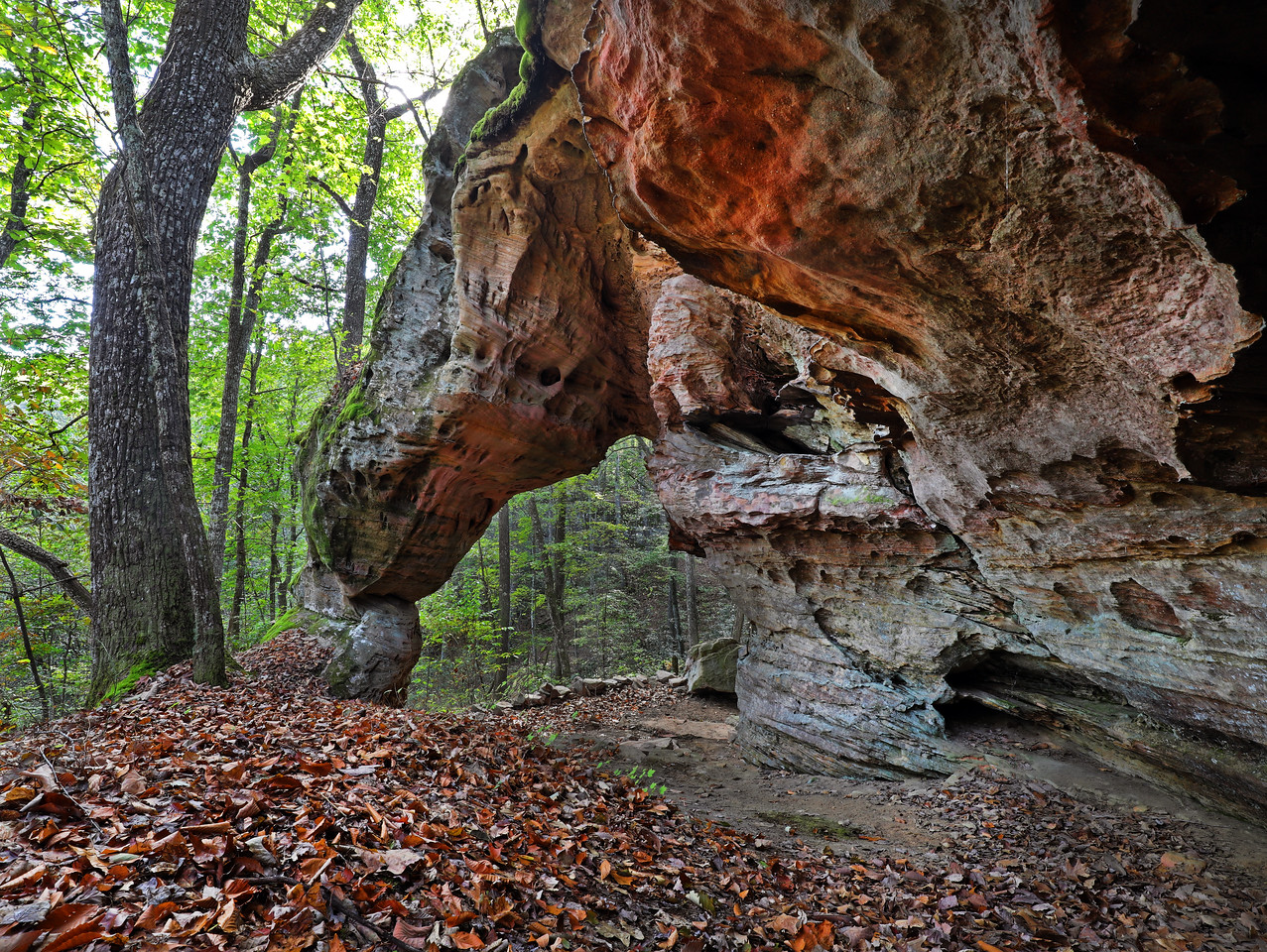 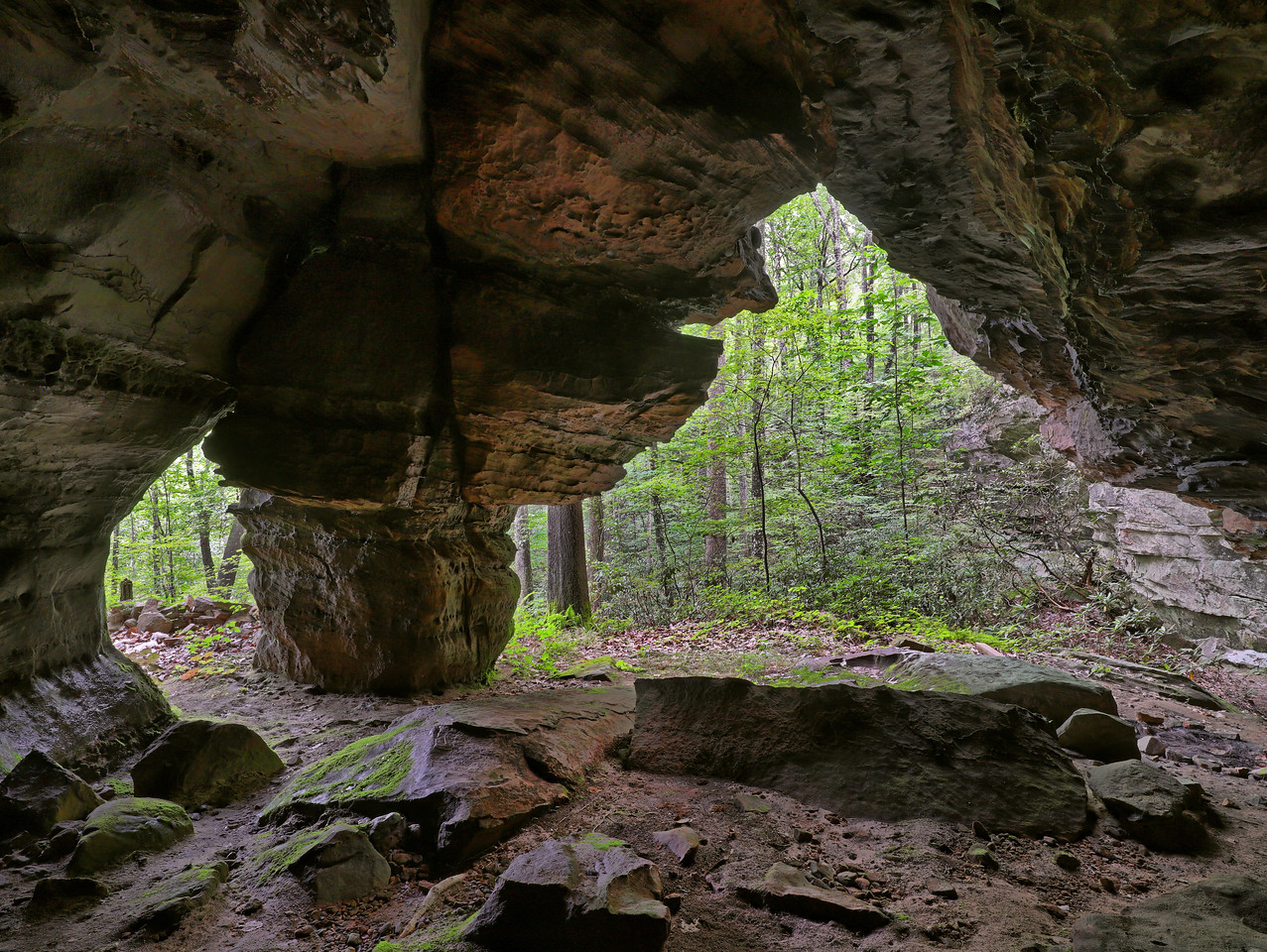 Distinctly different than any of the arches on this tour, Mt Victory arch is a massive pillar arch that reaches out from the ridgeline but to get to it you have to pass through Doorway Arch a section of rock eroded away at a rock recess.  There’s a lot of geology happening here in one spot and it’s really cool.  The faint unofficial trail to the arches, though short is sometimes hard to locate so be sure to have that GPS handy.  If you can’t locate the trail start heading off into the woods towards them and eventually you should pick it up.  The trail will pass gradually down the hill to a short section of man-made stone stairs right of the cliff line.  Ahead you will see a rock recess and to the right of that Mt. Victory should be visible. Walk the trail at the base of the cliff into the recess and to the right of the recess mouth you will see Doorway Arch.  Pass through the arch, to the right you see a man-made wall, to the left you will see Mt. Victory Arch.

Years ago when I first visited this arch it had seen some serious abuse; Trash everywhere, a rug, and two treated 4 x 4’s sticking 5 feet out of the ground right under Mt Victory, a fire pit, and the strange rock wall that stretches between the two arches.  We speculate that at one time someone was trying to make the area under Mt. Victory into a place to live. A couple of years ago some folks came by and cleaned up most of the trash and whatnot at the arch, only a rug and a rock wall remaining. However, on a recent return trip, someone has once again set up camp, creating a hearth for a fire pit, and a container to keep condoms cooking utensils, and canned goods.

To get there:  From Bolton Branch, Twin Arches head back to KY 192 and turn right.  Follow KY 192 for approx 16 miles passing by the Bee Rock Recreation Area and over the Rockcastle River and turn left on Old Whitney Road on top of the hill.  At the Y intersection keep right on Forest Road 122, it will turn to gravel.  At approx .6 miles from the Y look for a gated forest road on the right.  Park here. Walk the gated road back a very short distance looking for a trail on the right. 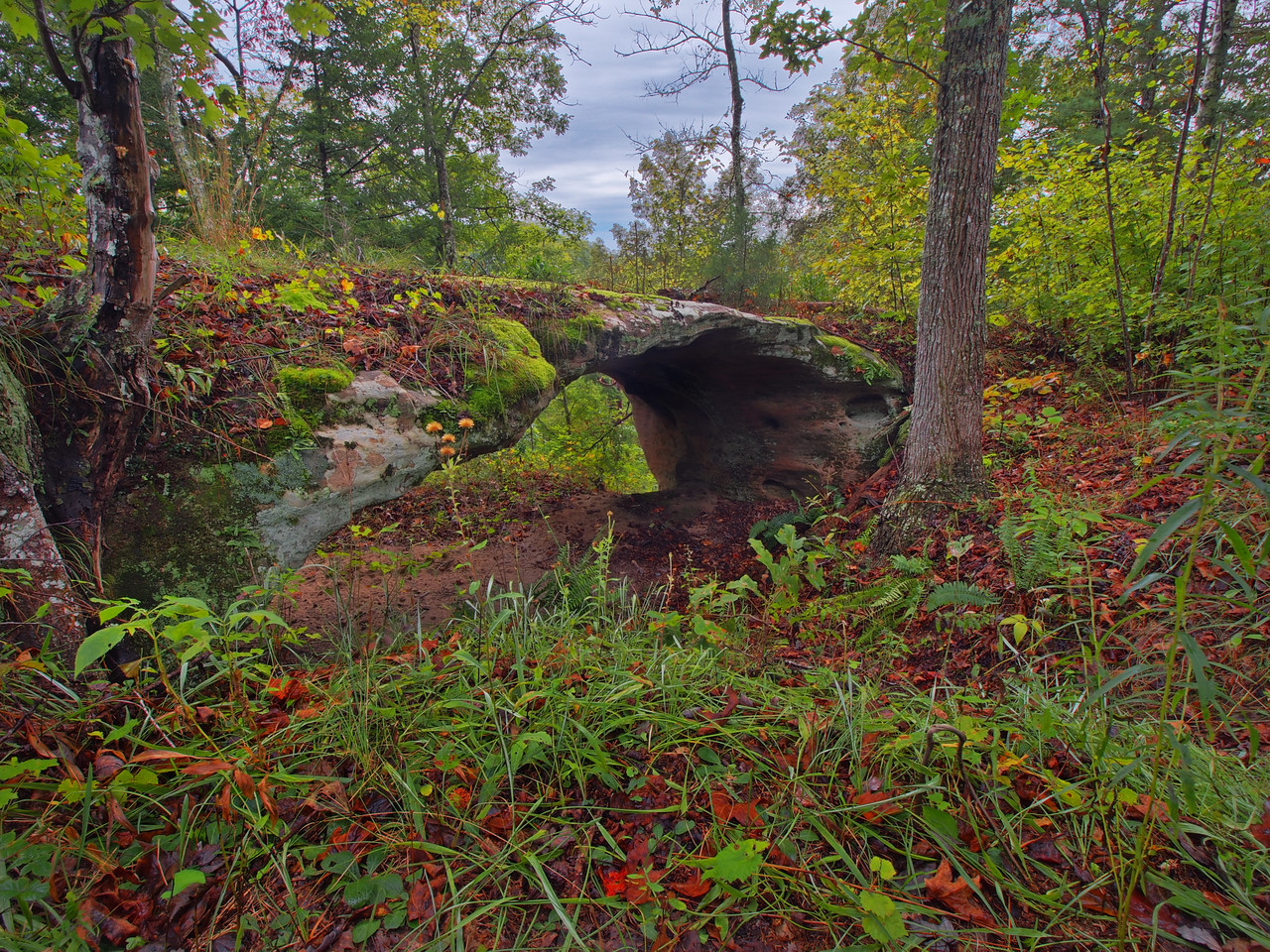 This span arch is the least impressive of the tour but since it’s not far away from Mt. Victory and it is worth checking out.  It might be .5 of a mile from the trailhead if that.  Follow the trail down the hill. Due to run off the trail has eroded a foot or two where you are walking through what is more like a crevasse. Eventually, the trail will level out with the rest of the surroundings and you’ll pass through a bald area of rock.  Keep your eyes peeled, the arch is to the left.  The arch is big enough to go under and has a skylight in the center.  Careful on the other side, it’s a long tumble down to the Rockcastle River below.

To get there:  From where you parked at Mt. Victory Arch, continue on FR 122 approx .9 miles.  At the Y intersection veer left onto FR 122A for approx 3.5 miles until you come to a large roundabout parking area.  The Nathan McClure Trailhead is to the right at approx 2 o’clock in the circle.

This concludes Arch Trip #3! Join us next time when we pick up where we left off and head over to Whitley County for 5 more aches!  Until then, happy arching!